Rules and helpful information concerning the contest can be found at http://studentspeaker.md4lions.org/

The contest provides an opportunity for competitive public speaking among high school students on a subject of vital interest to the contestants and to the American people as a whole. Topics are chosen

• To stimulate self-expression and independent thinking.
• To present to the public the problems surrounding the maintenance of this commonwealth as a free nation.
• To consider the means at our disposal of meeting the present and future world problems.

The West Torrance Lions Club has sponsored a Club-level contest each year, inviting students from West Torrance High School. We have had many students advance to the Region level. Recent winners have included: 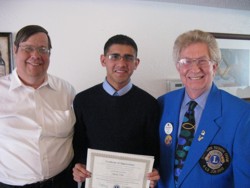